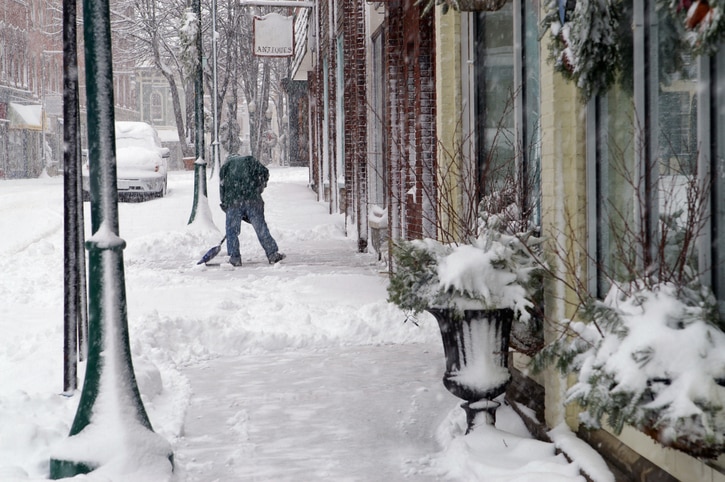 Storms the likes of the recent “bomb cyclone” are not news to true New Englanders, who have dealt with these sorts of storms as a way of life. However, that’s not to understate the dangers involved – especially as the storm left millions without power from Virginia up to Maine, submerged cars in winter tidal waves, toppled countless trees, and canceled nearly 5,000 flights.

In Boston, one of the highest tides on record flooded a subway station near the New England Aquarium. The previous record has gone on unbroken since the blizzard of 1978 but was tied by the bomb cyclone storm. Nearby, Quincy Police had reported rescuing more than 20 people from cars due to flood waters and posted photos on Twitter with the hashtag #dontdrownturnaround to warn off other motorists. Here on the blog, we’ve talked about winter driving and safety before when it comes to preparing for natural disasters such as what New England has just experienced.

This blog will focus on the host of personal injury liability situations that can arise from such storms.

Slippery sidewalks can pose a real problem. Particularly this most recent storm that covered steps and sidewalks with thick, slick icy sheets.

Most New England states have laws regarding sidewalks and the responsibility on the part of both business owners and personal property owners. For example, in Boston, property owners have “up to three hours after it stopped snowing” to clear sidewalks and curb ramps. If snowfall came overnight, the requirement is extended to within 3 hours after sunrise. This is also the case in regard to snow buildup due to snow-plows. “Simply put, we’re looking for an accessible path of travel. While the rule is three hours, we try to be reasonable for deciding when we start the clock,” says Boston’s website. “Our goal isn’t to fine you. We just want people — especially youth and seniors — to be able to get around safely.

Slip and fall injuries are massively expensive, with the Centers for Disease Control and Prevention (CDC) estimating 800,000 falls annually that cost upwards of $31 million in medical costs. The CDC also says falls are the leading cause of death and injury in older Americans.

The kind of ice-buildup that was possible from the storm, as well as New England’s experience with ice storms such as the one in 2008, can cause trees to fall. Falling trees that go into the road or onto a neighbor’s property causing damage can open the homeowner to a charge of liability. Massachusetts sees trees on a homeowner’s property as belonging to the homeowner. Any damage it causes can be directly tied to the homeowner.

Many New Englanders are skilled winter motorists. “But when 17 percent of all vehicle crashes occur during winter conditions, it’s clear that we could all use a refresher when it comes to making our way through a winter wonderland,” warned the National Highway Traffic Safety Association.

See our blog on Winter Driving Safety for an infographic with tips on icy road conditions.

Besides the understandable dangers posed by icy roads, it should also be noted that sub-zero temperatures after an accident can prove catastrophic. The 15 below Fahrenheit temperatures, coupled with hurricane-force winds of up to 70 miles per hour, put anyone in the elements at risk for frostbite in just moments. After an accident, it’s advised to turn off the car if there has been damage. This means that in sub-zero temperatures, further injuries such as a frostbite or hypothermia can set in.

Having an emergency kit in the car with a thermal blanket can go a long way, as can being aware of icy sidewalks and road surfaces when outside the car.

While it’s unlikely that another bomb cyclone will blast the Northeast this season, doing your best to avoid personal injury and premises liability situations in the face of such natural disasters is the best course of action.