Tom Kiley - A Motorcycle Accident Attorney in Portsmouth, NH Who's Been Riding and Fighting For Riders for 40 Years

Motorcycle accidents can be life-altering events. Often resulting in serious, extensive injuries that can take months or even years to fully heal, a motorcycle accident can have a long-lasting effect on a person’s physical abilities. The related medical expenses and rehabilitation costs can quickly surpass any person’s insurance policy limits and heavily strain their personal financial resources. In addition, the injured rider is usually unable to return to work for weeks or months on end which can put further stress on their already dwindling budget. And while many accident victims eventually recover from their injuries and are able to enjoy the health and capabilities they had before, the rehabilitation process can be lengthy, painful, and frustrating.

If you are a motorcycle accident victim, the problems described above may sound uncomfortably familiar to you. However, regardless of the extent of your injuries and the scope of the financial issues you’re facing, the most important thing you need to realize is that you don’t have to deal with this situation on your own. Kiley Law Group motorcycle accident lawyers have assisted countless accident victims in New Hampshire on the road to physical, emotional, and financial recovery. Now, we are ready to help you successfully complete your journey to recovery as well.

Motorcycle accident victims in New Hampshire may be entitled to financial compensation for their injuries and the resulting financial losses such as medical bills and loss of income. Kiley Law Group motorcycle lawyers can help you prepare a legal claim, called a personal injury claim, against the person responsible for your accident and resulting injuries. If you or a family member have been injured in a motorcycle accident, we would like to hear your story. Please contact our legal team to schedule a consultation with a qualified team member who will evaluate your case free of charge.

What our past clients say:

“I felt that they were very honest and professional and did everything that they said, without fail. They were nice guys, very prompt, and I would recommend them to anybody.” – Paul D. 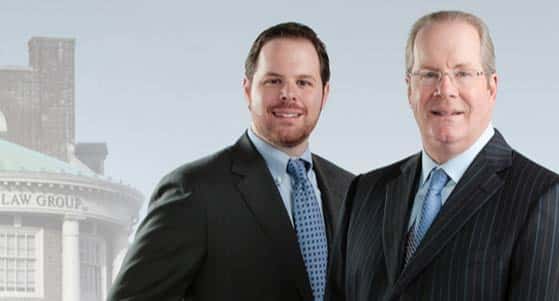 How Does a Personal Injury Claim Work?

According to New Hampshire state law, every motorist – be it a car driver, a motorcycle rider or any other – owes a duty of care to other users of the road. This means that each person is required to drive cautiously, not putting the safety of other motorists at unnecessary risk. Speeding, disobeying traffic laws, running red lights or failing to take additional precautions and adjust to road conditions are all examples of negligent actions that constitute a breach of this duty of care. If the negligence of one driver causes an accident in which another motorist is hurt, the driver at-fault can be found liable for the victim’s injuries and related financial losses. In order to get compensated, the injured driver must file a legal claim, called a personal injury claim, with the at-fault driver’s insurance company.

In such a claim, the injured party must present a clear and detailed account of the accident, including the evidence of the other driver’s fault and the injuries sustained as a result. The injured party should also clearly state the sum they’re demanding to be paid along with an explanation as to why such an amount is justified. In most cases, the insurance company will try to negotiate a lower compensation amount before agreeing to the pay-out.

However, in some cases, the insurer may not be cooperative at all and may refuse to compensate the injured party. Of course, the insurance company’s unwillingness doesn’t invalidate the claim. Still, to be able to recover financial compensation from an uncooperative insurer, it may be necessary to file a lawsuit against the at-fault driver and the insurer in a court of law.

What Will the Compensation Cover?

As mentioned above, motorcycle accident victims can quickly find themselves in dire financial straits due to the high cost of the initial medical care, the ongoing follow-up treatments as well as medication and rehabilitation bills. Often, the limits of the injured party’s personal medical insurance are insufficient to cover all these different expenses and a victim needs to cover some of the costs out of their own pocket.

One of the main goals of a personal injury claim is to recover all such personal expenses. In fact, an injured motorcyclist can obtain compensation for both monetary losses, such as the ones mentioned above, and non-monetary ones. Non-monetary losses, also called general damages, aim to compensate the victim for the non-economic impact of the accident. Below, you will find a list of the most common damages a victim of a motorcycle accident can be awarded in a personal injury claim:

Do I Need a Lawyer to Obtain Compensation?

While a motorcycle accident victim can file a personal injury claim by themselves, having an experienced attorney handle your claim and represent you against the at-fault party’s insurer dramatically increases your chances of success. A personal injury claim consists of multiple smaller steps and elements all of which need to be properly taken care of for the claim to prevail. For example, before presenting your financial demands to the insurance company, you need to gather evidence demonstrating the other party’s fault and their liability for the accident. Such evidence may include photographs from the accident site, the police report, and testimonies of witnesses. An experienced attorney will know not only how to gather such evidence but also how to organize it into a strong claim that the insurance company will be compelled to reckon with.

In addition, handling a personal injury claim on your own is exhausting, time-consuming, and often frustrating. Allowing an attorney to take care of this will take a huge load off your shoulders. Our Tom Kiley motorcycle attorneys will take care of every possible legal aspect of your personal injury claim so that you can focus on what’s most important to your right now – physical and emotional recovery from the accident and your injuries.

What Kinds of Motorcycle Accident Cases Do You Handle?

Negligent actions of other drivers are one of the three main causes of serious motorcycle accidents in New Hampshire. The following situations are among the most common accident scenarios mentioned in personal injury claims we handle on behalf of injured motorcycle riders:

Can I Afford to Work With a Kiley Law Group Attorney?

One of the main concerns of many motorcycle accident victims in New Hampshire who contact us is whether they will be able to afford to work with one of our attorneys for the duration of their case. We completely understand this concern and we are happy to inform you that our lawyers offer the highest quality of legal service on terms that are affordable for all of our clients.

Importantly, the initial consultation is always free and there are no out-of-the-pocket expenses that you will have to bear at any point during your case. All of our motorcycle accident attorneys work on a contingent fee basis. This means that our legal fees will be paid as a percentage of the money awarded to you in damages. It also means that you won’t have to pay us anything unless we manage to secure financial compensation for your losses.

Kiley Law Group motorcycle accident attorneys feel deeply for the difficult situation motorcycle accident victims find themselves in. If you have suffered injuries as a result of a negligent or reckless driver and are struggling with the physical and financial impact, we urge you to contact our experienced lawyers and take the first step on your way to recovery.

Everyone was inviting and made me feel welcome. I would tell that everyone was hardworking and motivated to do the best they could for me. I am happy I chose Kiley Law Group. The Kiley Law Group handled my personal injury case, and I have previously worked with one other lawyer. My experience was great and I would definitely recommend Tom Kiley, Jr. and the law group again. I spent about a week in the hospital, I had to learn how to walk again. I was basically just thinking… ‘I’m gonna have two hundred thousand dollars in bills to pay’ because I wasn’t insured. They made a settlement with the insurance company that was able to pay all my bills and also compensate me as well. When I contacted them, they basically said ‘Don’t worry about anything. The next thing I know I was on the ground and going into an ambulance and going to the hospital…. I can’t say enough about what he did for me, and how he actually paid attention to where I was at and how things were going. I can’t complain one bit, there wasn’t anything I would say that they should change or do better. Excellent! Attorney Kiley was always warm and helpful. He never seemed to lack for my concern and always responded to me in a timely manner. I never felt forgotten and was never bogged down with complicated matters. It was a pain free process and I’m very satisfied with the results. The Kiley Law Group was very caring and concerned for my feelings. They explained all the options in great detail that even I, with my grief at losing my wife of 30+ years, was able to understand. They kept me informed about all aspects of the case. After my auto accident I was consumed with paper/calls in regards to my case, so a friend referred me to Tom Kiley, Jr. After speaking with Tom Kiley, Jr., he put me at ease and handled my case. He always kept me informed with what was going on and helped during a difficult time. Any time I had a question or concern, both Cindy or Attorney Kiley would be very quick to respond. Very personable and caring. They take time to explain the processes and ensured that I had a clear understanding. I highly recommend to anyone that would be in need of services. Tom Kiley, Jr. handled my auto accident case with a high level of professionalism and dedication. I am very happy with the outcome of my case and would not hesitate to use them again in the future or refer to friends and family. Thank you! I was thoroughly impressed with the professional services offered with Kiley Law Group and will continue recommending prospective clients. I would like to take this opportunity to extend my gratitude to Tom Kiley, Jr. for everything that has been accomplished throughout this sensitive time.